In part 1 I ranted about the current state of in-season athlete preparation and singled out hockey. I did this for a couple of reasons. First is that this is the world I am familiar with. Much of my experience in strength and conditioning has been working with hockey players and teams. Early on I heard the arguments that hockey is unique and hockey players have to train differently. The argument is often made that hockey is more aerobic, because players are on the ice for shifts of 45s-90s. Therefor, they need to be better “conditioned.” However, according to the 1998 study by sports physiologist Michael Bracko, hockey “performance” skating is characterized by a lot of gliding (40% of time spent on ice). In fact if you look at the distribution of efforts amongst forwards in the NHL: 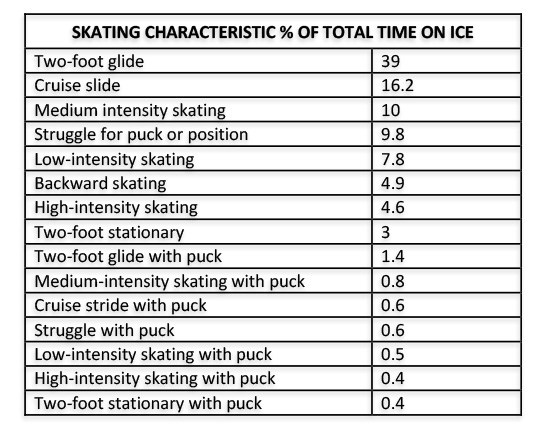 You will note that the top 3 are very low intensity movement patterns, akin to walking or standing still off ice. With “struggle for puck position” being the only significant workload in the top 5, and that is largely a strength/power maneuver. In fact, if you add up all of the high (including struggle work) and medium intensity work (medium, I would argue is still just over the effort level of a trot off ice due to the lack of friction and increased ground force contact time), we are only at about 26-30% (depending on how aggressive the backward skate is) of a shift. If a shift is 45s, that means the amount of meaningfully stressful work is between 10-15s. Consider also that this 10-15s of work does not take place all at once.

Food for Thought: Aerobic capacity is maintained with as little as two high-intensity training sessions per week, lasting as little as 13-40 min.

Based on this profile, I would say that an offensive lineman playing in a spread, no huddle offense (football) needs to be more ‘conditioned’ than a hockey player! (Getting crazy, I know.) Think about it. They run a play that lasts 3-5 seconds of high intensity work, jog to the spot of the ball and run another high intensity play as little as 9 seconds later, and can do that for a drive (sequence of consecutive offensive plays) of 15-20 plays. That is close to 5 minutes of medium-high intensity work with probably less than 10% of that time being considered low intensity (setting up to snap the ball) and even then, they are require to hold an isometric, deep squat at 300+lbs!

CLICK TO TWEET – Find out why “an offensive lineman playing in a spread, no huddle offense (football) needs to be more ‘conditioned’ than a hockey player!” – Justin Vince

You may rebut that, “during a play, offensive linemen aren’t covering as much ground.” However, if we look back at our chart, the highest expenditure for hockey forwards is struggle for puck position. Sounds a lot like fending off a rush from a defensive lineman, or sprinting for position on a run block.

“But they are big plugs,” you may say? Well let’s consider that if NFL prospect O-Linemen participated at this years 2017 NHL combine, about half would have been quick enough to finish in the top 20 in the pro agility test, or 5-10-5, with 2 breaking the top ten and these guys are carrying an average of around 120lbs more weight. Don’t like the O Line comparison? How about D Line? 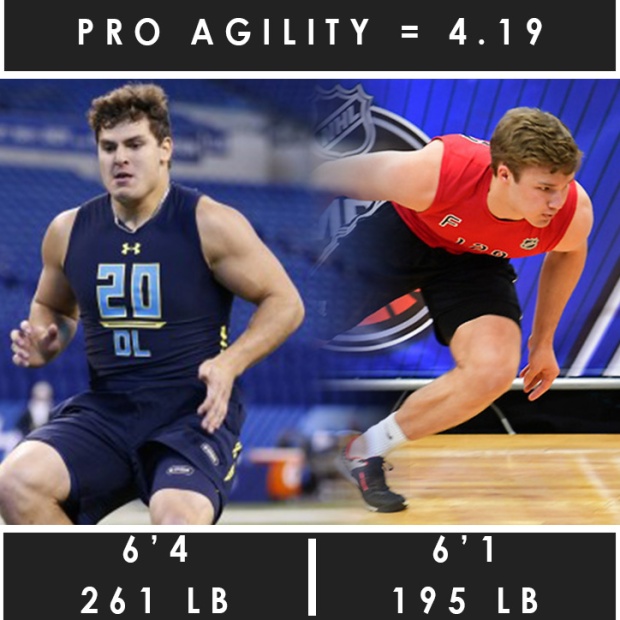 Pro Agility tests the speed of change of direction and is used in both the NFL and NHL combines.

Defensive ends have the same scenario as far as amount of work completed on a drive, but these guys cover A LOT more ground than their offensive counterparts. Dropping into coverage on receivers, rushing passers, chasing down running backs, in addition to ‘struggle for position.’ If they took part in the combine EVERY Defensive End would have had a time good enough to be in the top 10 of 5-10-5, with 80% in the top 5 and even tie the impressive number of 4.19s. The difference is the hockey player was 6’1, 195 and the D Lineman was 6’4, 261. Teach that man to skate!!

Now I’m not saying that we need to make all of our hockey players in to 300 lb behemoths,. All of this is just a way to illustrate that hockey is not special, from a strictly strength and conditioning perspective. Hockey players are not different athletes, in the way many old school coaches would argue. Hockey is a speed/power based, team sport. What makes hockey special is the skates, the sticks, the pucks and the overall speed of the game. In that way, hockey is a spectacular skill, which is so much more than just athleticism. All of this is pulling me back to ‘conditioning.’

CLICK TO TWEET – hockey is a spectacular skill, which is so much more than just athleticism. – Justin Vince

By now many out there are ready to write me hate mail, or think that I am saying hockey players should give up ‘conditioning.’ In part 3 find out why I always put quotations around ‘conditioning,’ and where I believe hockey players need to be spending their time in season, from a Strength and Conditioning perspective.

DISCLAIMER: I am aware that the players in the NFL combine are on average about 3 years older than the NHL combine; I am also aware that hockey isn’t played on turf and so the comparison of test times may not be fare (but should it be? Year round hockey?) This comparison is simply used to break down some old misconceptions surrounding ‘sport specific training’